What should you be worried about? 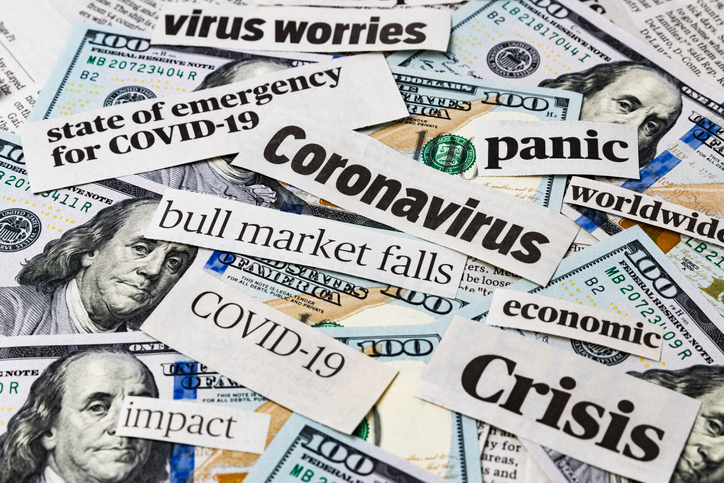 September has been a little bumpy, as history suggested it might be. As my colleague, Paul Broughton, wrote in a late August commentary (“Brace for September, But Don’t Panic”), investors needed to be prepared for the usual flow of negative news that seems to appear after summer vacations come to a close. There was plenty of bad news to go around over the last few weeks—from concerns about the debt ceiling to fiscal spending, higher taxes, and China’s issues. But, regardless, Paul wrote, fundamentals remain strong and investors would do well to focus on the longer term. But there’s been a lot of worry lately about that longer term, about future growth. Are we heading towards a lost decade, like in the 1970’s where stagflation took hold? Or are the facts showing a less worrisome trend? Remember, investors, you’re focused on the long term—at least a few years, right? So how does the real economy look and what should you be worried about?

Yes, growth is slowing. It has to, after the sharp recovery over the last few quarters from the pandemic’s shutdown across so many (especially, services) sectors. It now appears that real GDP growth will slow from an annualized rate of 12% last quarter to around 5% this quarter and 3% by the middle of next year. Note that those rates of growth are still comfortably above long-term GDP growth trends for a developed economy like ours (less than 2%). And yet we understand that all is not well and we “should” be growing faster. While we’re well off the bottom, there is presumably still some slack left.

It turns out it isn’t so easy to turn an economy back on after consumers and businesses went into hiding for a year. After a short hibernation in 2020, consumers came roaring back, looking to spend lots of extra savings, but businesses struggled to bring back workers and ramp up production. Consumers have been spending like it’s been Christmas for the last several months, but global production and shipping capacity is unable to handle it. Remember in years’ past when we’d suffer delayed deliveries in advance of the holidays? The shippers simply couldn’t add enough capacity for the holiday surge. Well, shippers have essentially been trying to deal with a holiday rush for the last several months. Ports are clogged, and so manufacturers, particularly out of China and southeast Asia, can’t get their products to those consumers.

Moreover, the producers can’t get enough parts to build the things consumers want – from cars to consumer electronics. The shortage in semiconductors is one very familiar example of those problems. Some expected those shortages to have abated by now, but we continue to hear of long backorders for those components. And that’s because it takes years, not months, to add new chip capacity.

Complicating matters further, is the delta variant. The surge in cases in the US and globally interrupted production, especially in APAC where so much of the world’s manufacturing takes place. Vietnam and Malaysia were particularly hard hit and that placed even greater pressure on China to deliver the goods. But China’s ports were already slowed by some delta-related shutdowns.

And then, finally, there are ongoing challenges among firms to fill open positions. It’s hard to ramp up production without enough workers. Many baby boomers chose to retire. And labor-saving technology investments can’t be made overnight. When people are reluctant to return to the workforce, for any number of reasons, it makes it harder to firms to get enough applicants to make good hires. That “matching” process can be slow in normal times. Add in concerns about delta or childcare and it only becomes slower.

So, are we facing stagflation, where inflation surges and growth stalls? Not likely, given the realities of strong demand and determined efforts to raise output. Look at the 1970s and early 80s in the chart below – that was stagflation. GDP growth went negative. Multiple times. 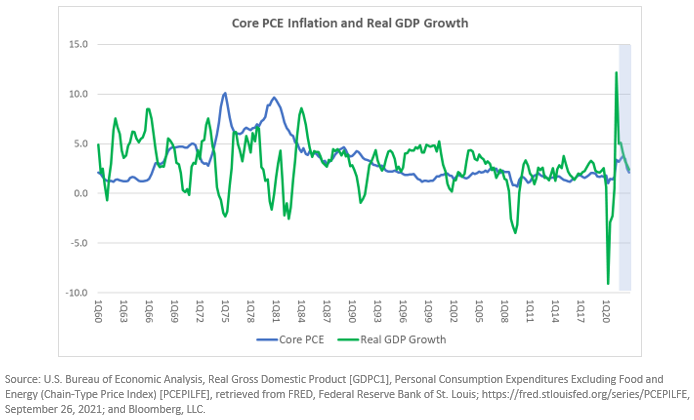 The outlook for the US economy isn’t anything like this (for one, we are unlikely to see the sort of negative productivity shocks we did in the 1970s from the OPEC oil embargoes). The shortages that are plaguing firms actually imply a longer recovery with GDP growth above normal for longer. Indeed, Bloomberg consensus forecasts (the shaded area in the chart) show that growth is not expected to stall out, but rather to remain above long-term trends for the next several quarters. But could inflation remain a persistent or even growing problem? While some shortages are likely to abate, which would reduce inflationary pressures, other shortages are likely to remain or even get worse, such as in housing and labor markets. So, a careful eye on that data is required, and we have positioned portfolios for the ongoing recovery potential and also to protect against the risk of higher inflation and interest rates.